Eric from Anchorage, Alaska wanted a fighter jet tap handle for his home bar which has a United States Air Force 525th Fighter Squadron theme. Knockout Designs got to work right away, paying homage to his vision. The nickel metal fighter jet tap handle we made for Eric is 10 inches tall with a fighter jet on top of a long tail of exhaust. We used decals with the logos from the 525th Air Force Squadron to ensure an accurate representation of the important work of this unit. Knockout Designs is an excellent option for small orders of metal tap handles for home brewers, restaurants, and bars. We are honored to work with our armed service members, and thank them for their dedication to our country. Knockout Designs has worked with numerous veteran-owned bars and breweries. 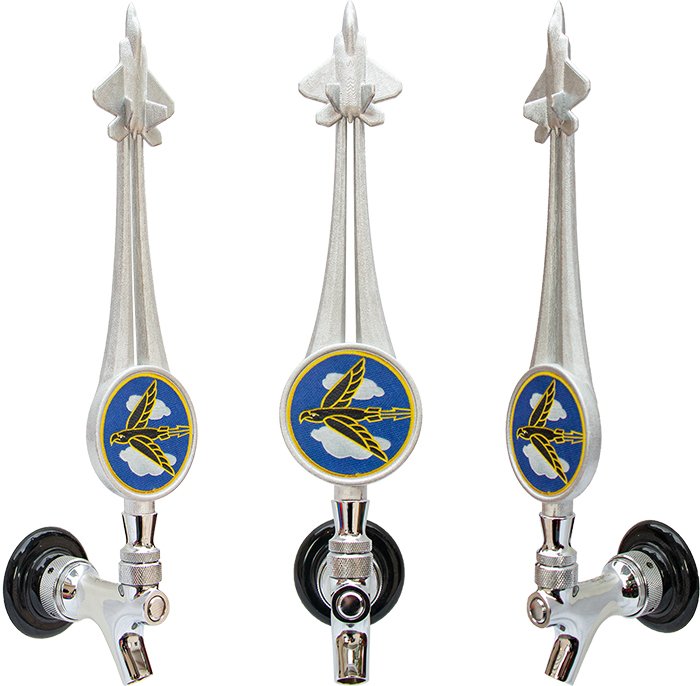 The 525th Fighter Squadron has a long, important military history. The squadron was first activated as the 309th Bombardment Squadron in February 1942. After training in the United States, it deployed to the Mediterranean Theater of Operations, where it became the 525th Fighter-Bomber Squadron and engaged in combat until the spring of 1945, earning two Distinguished Unit Citations. After VE Day, the squadron became part of the occupation forces in Germany. Briefly inactivated in 1946, it returned to Germany a few months later. During the Cold War, the squadron served in the fighter bomber role as the 525th Fighter-Bomber Squadron and in the air defense role as the 525th Fighter-Interceptor Squadron. It became the 525th Tactical Fighter Squadron in 1969. The squadron again saw combat service in the Gulf War before inactivating in March 1992. The squadron was reactivated in its current location, assigned to the 3d Operations Group at Joint Base Elmendorf–Richardson, Alaska, in September 2007. The 525th took part in Operation Northern Edge in May 2021, which featured all branches of the military. Approximately 25 F-22 Raptors from the 525th Fighter Squadron took part in Operation Pacific Iron, which ran from July-August 2021, according to a press release from the U.S. Indo-Pacific Command.